This article focuses on how to convert a 2D photo to 3D with the help of Triaxes 3DMasterKit. In our example we use the image of a city and are planning to create a large-format lenticular 3D image. 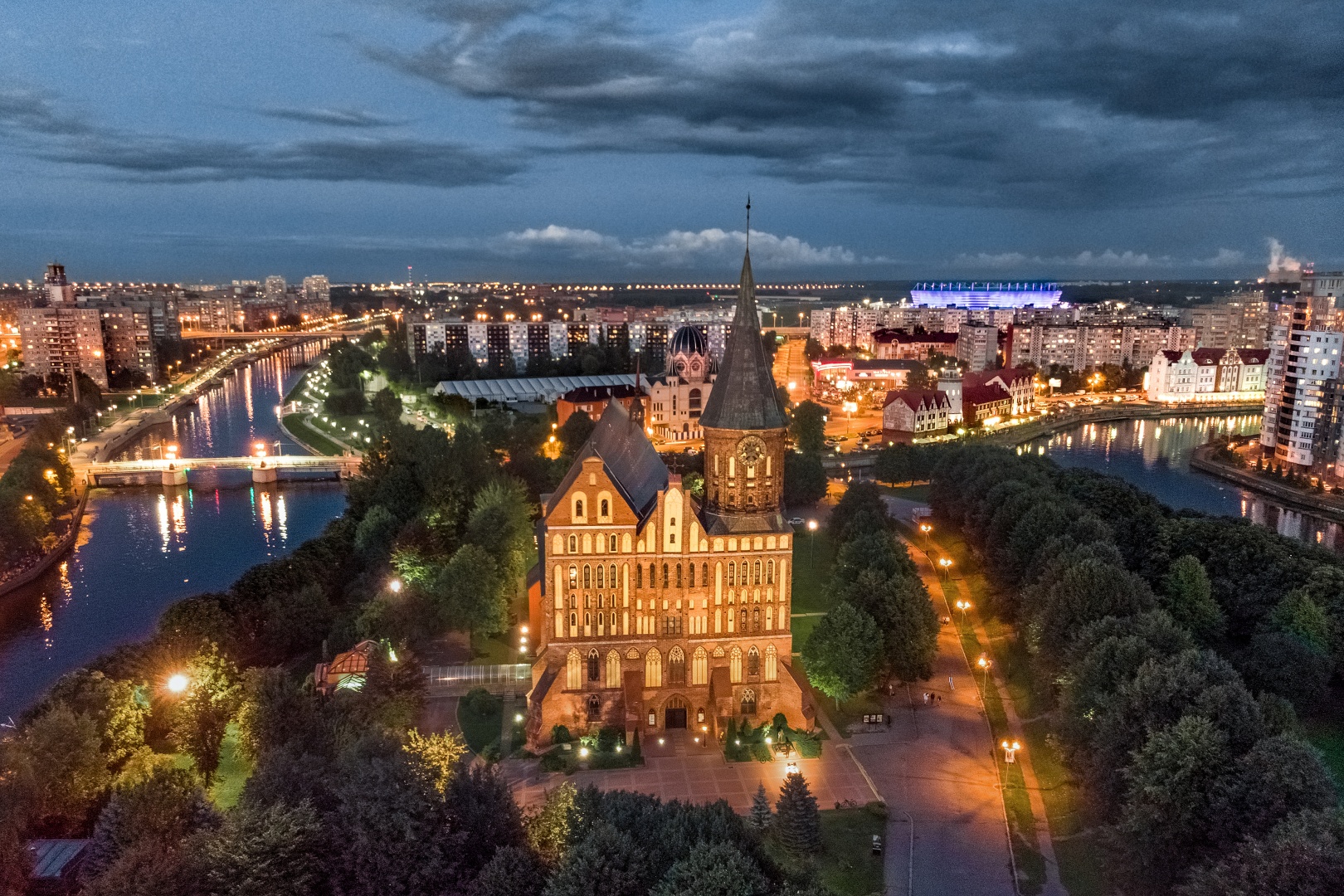 Here’s the video demonstrating the whole conversion process in detail:

Some expanded commentaries on main stages of the process are given below.

1.  Adding a layer to the project

Start Triaxes 3DMasterKit and create a new project, then add the photo to the project as a layer (Layers-Add…). Select the layer (left-click on the layer icon) and set its position at Depth=0. 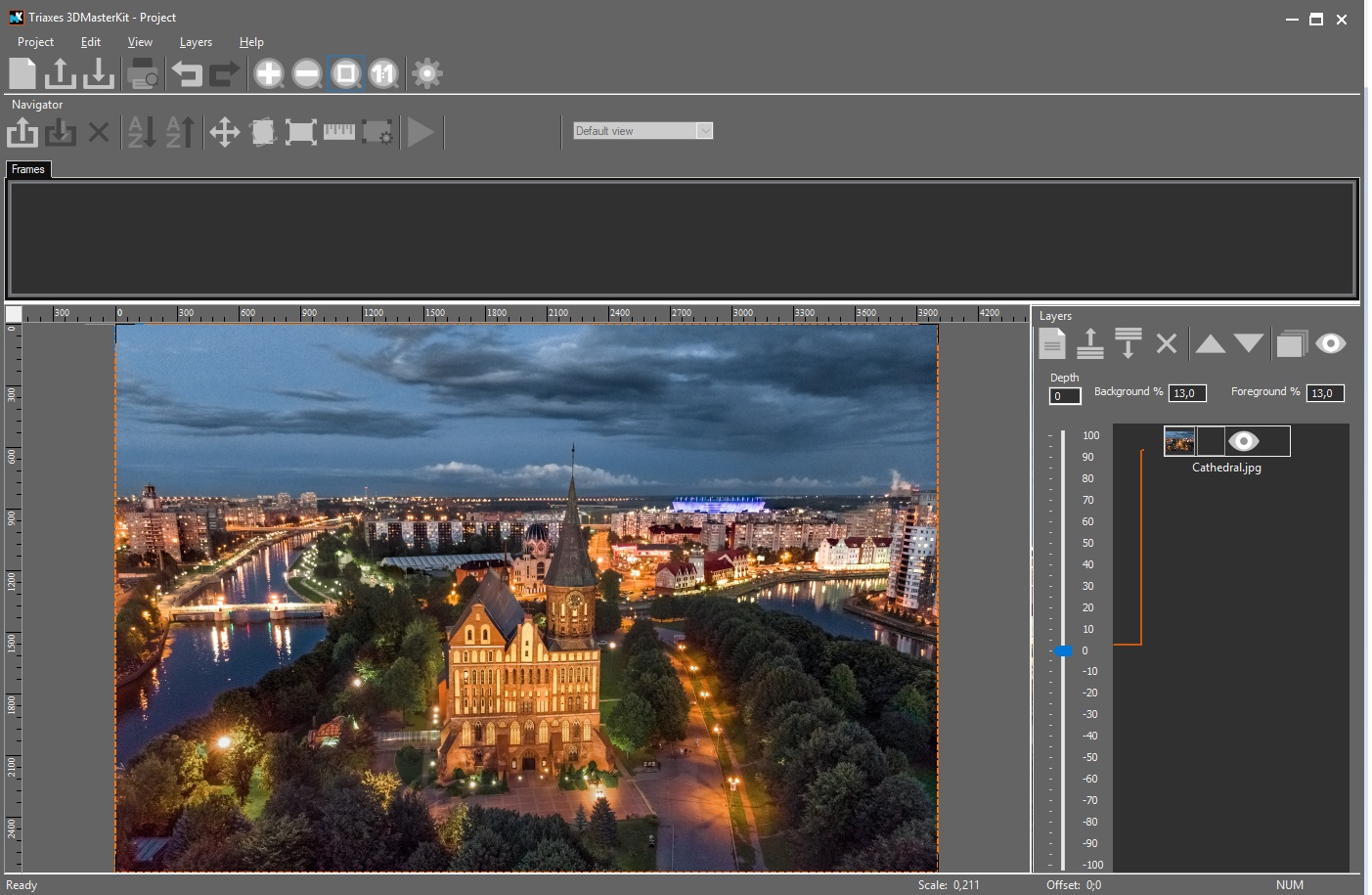 2.Adding a depth map to the layer

Depth map is a subsidiary gray-scale image, where pixel brightness (usually ranging from 0 to 255) indicates distances to image objects (the brighter the object the closer it is to the viewer).

There are different methods to create a depth map for the image. For example, a depth map can be drawn in a graphics editor (you can get more info on depth map creation methods by following the links at the end of the article).

To add a depth map right-click on the layer icon and choose Load depth map… from the context menu. Then choose the depth map and add it to the project. The depth map and the image must have identical image sizes. 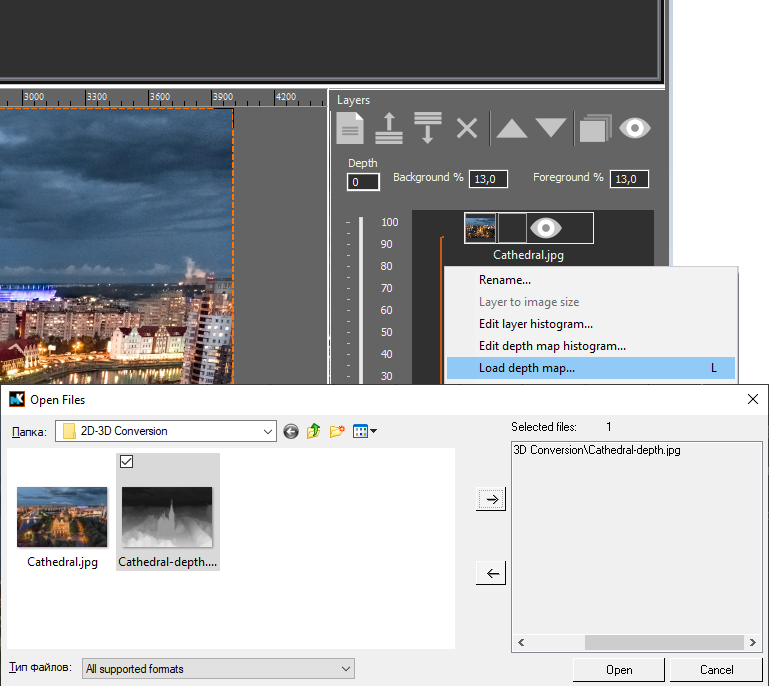 3.  Preview of the effect

After adding the depth map to the layer you can evaluate the 3D effect being created. For that generate a series of frames (Layers-Generate multiview…, or press the corresponding button on the Layers panel). 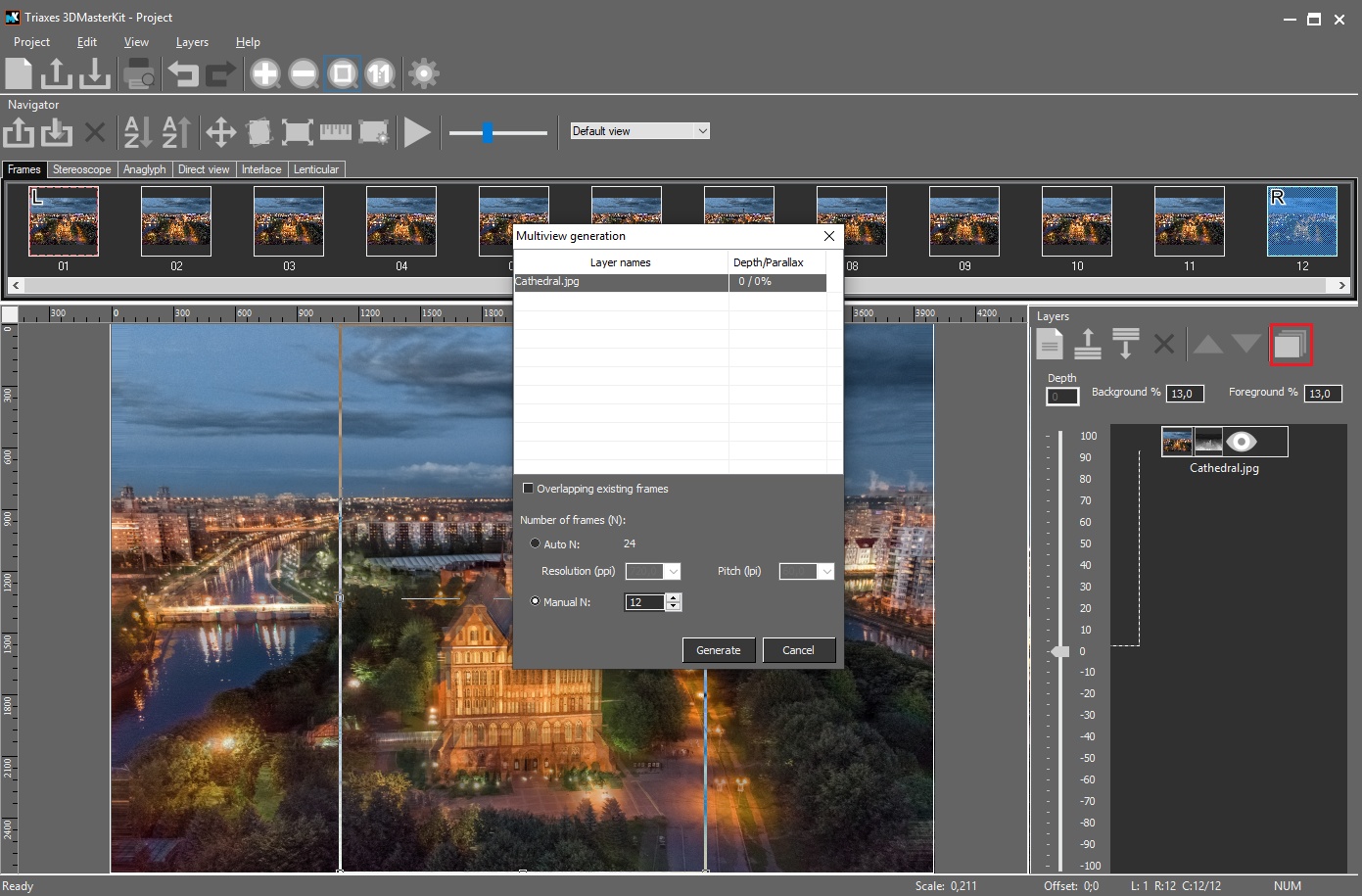 To preview the effect it is enough to generate a small number of frames (usually 6-12). You can view the frames in the animation mode and evaluate the 3D effect (View-Animation, or press either the corresponding button on the tool bar or the spacebar).  Let’s have a closer look at the created frames. The slider on the tool bar allows changing the transparency of frames overlapping each other. By dragging the slider to the far-left you can see the left frame, the far-right position of the slider shows the right frame. The image can be also zoomed in. Sometimes there appear problem areas – these are usually parts of the image where the depth map has sharp transitions. It usually takes place when there are long distances separating foreground and background image objects. It means the software doesn’t have the information about the background objects hidden behind foreground ones. When foreground objects shift, the software completes the image using the information available. If the area to be completed is big, there appear flaws that look like stretches (see the image below). 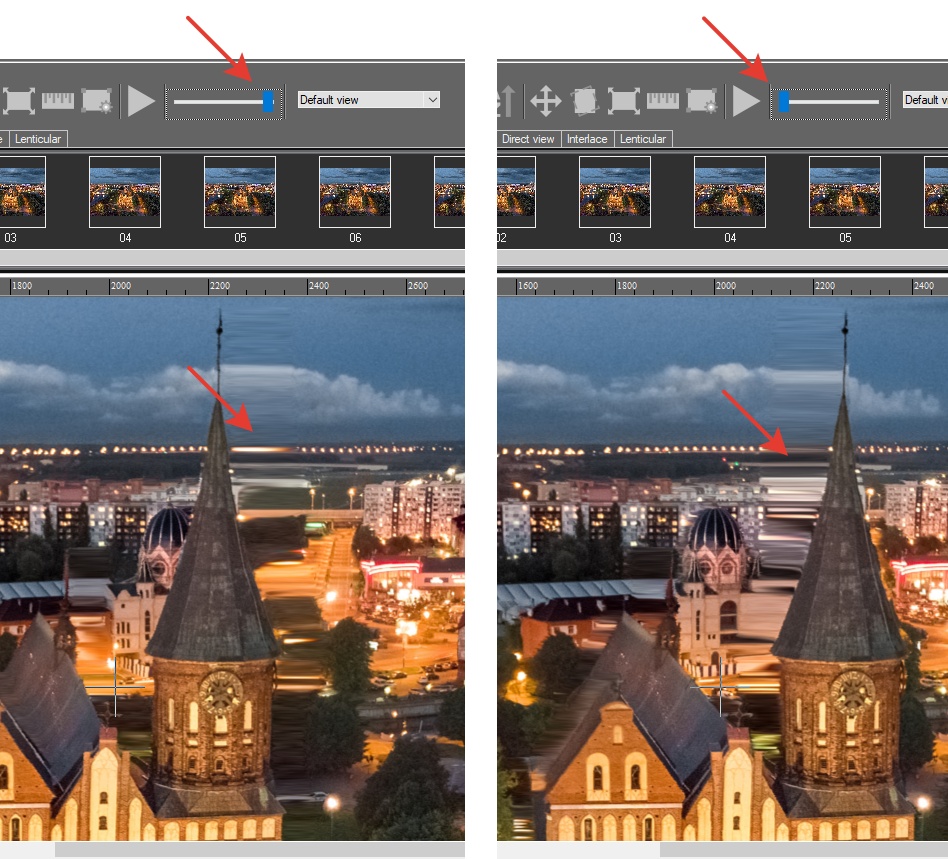 This problem can be solved by separating the foreground objects into standalone layers and reconstructing the background objects. You can perform this operation in a graphics editor like Photoshop or GIMP. The image split into layers is saved to the .psd file.

Splitting into layers is one of the basic image editing operations, therefore I am not going to go into details here. Let’s focus on the following recommendations only:

Let’s assume that we have an image already split into 3 layers and saved to Cathedral.psd. Let’s perform the following actions:

As a result the software main window will look like this.

To create a 3D effect we need to add a depth map to the layers.

Basically there are several ways to get a depth map:
1) Draw it yourself: https://triaxes.com/articles/manual-depth-map-creation/
2) Order it as the service. The depth map used in this example was drawn by www.depthmask.com.
3) Get it from the camera (some modern cameras and smartphones are able to generate depth maps) 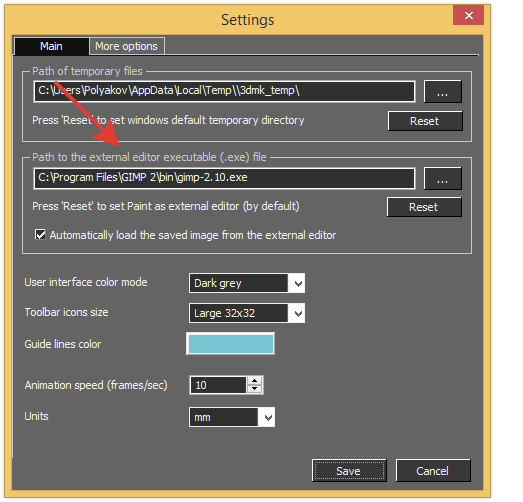 3.Choose Edit in external editor from the context menu and open the image for editing. 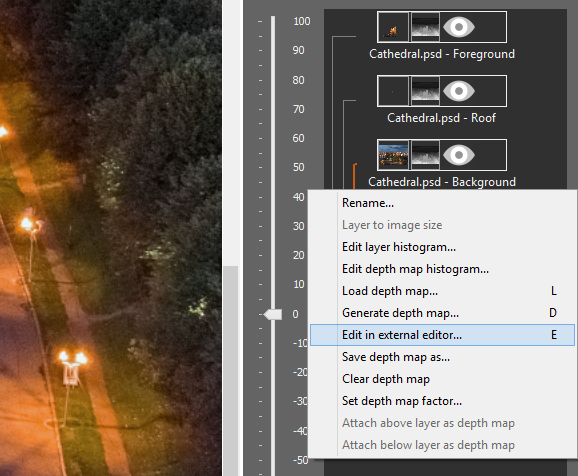 3DMasterKit uses temporary files when connecting with external editors. To transfer changes to 3DMasterKit you need to save them to the same file. When doing that do not change the location of the file, image size, as well as names and order of layers. If something went wrong and due to some reason the connection between programs was broken, you can save the changes performed in the editor as a .psd file under any name and to any location, and then add the edited project to 3DMasterKit (Layer-Add…).

For example, we removed the cathedral image from the background layer. Consequently it must be removed from the depth map. You should get something like this (see the picture below).

Background layer and depth map adapted to it.

At this stage we save the project with all the layers and depth maps to a .psdd file (Layers-Save template…). Then we can copy this file and open it again in 3DMasterKit or Legend (Layers-Add…).

The software offers the recommended number of frames depending on the expected lenticular image resolution and LPI of the lens.

The generated frames will be shown as a list at the top of the software interface.

You can evaluate the 3D effect with the help of the animation mode (View-Animation). 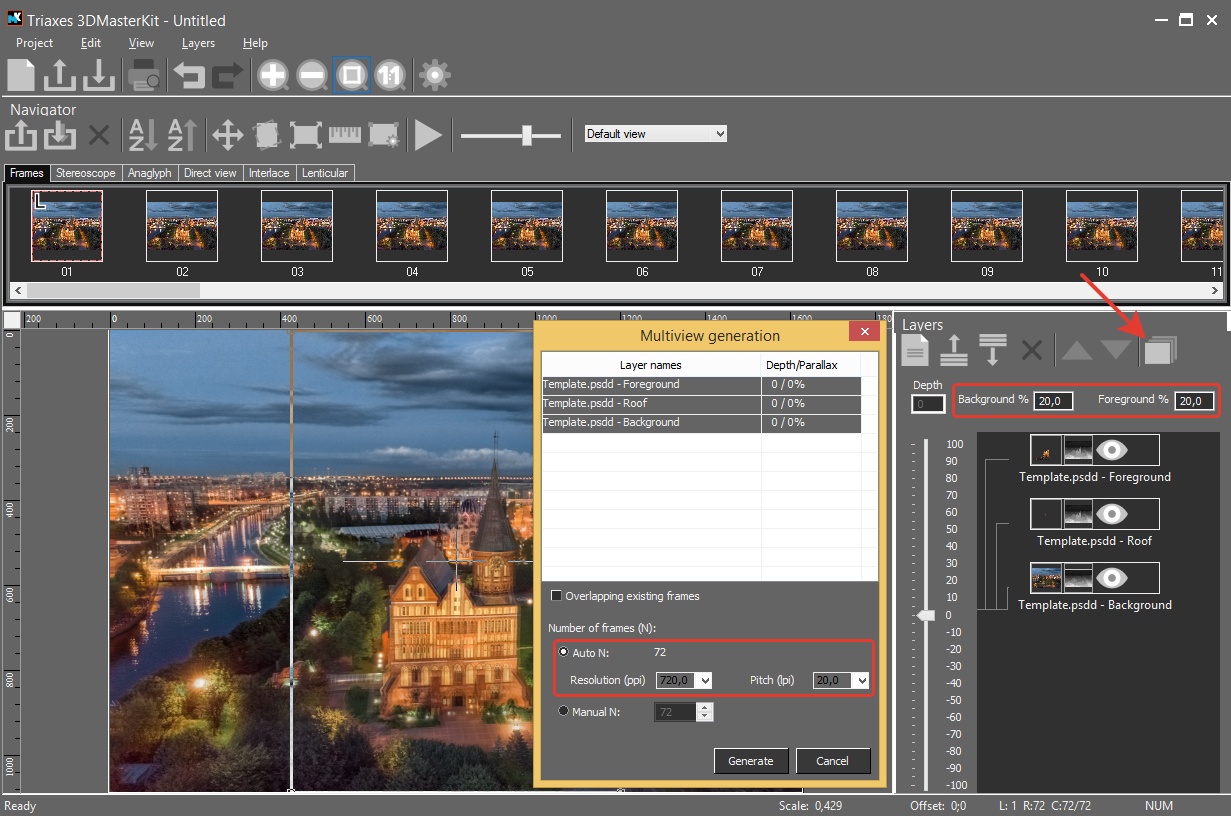 The software allows saving results in the following formats:

8.Files from this example

2. From Stereo Pair to Lenticular Print