Holographic installation in the hold of the Vityaz research vessel

The Vityaz research vessel is the main exhibit of the Museum of the World Ocean in Kaliningrad and the central object of the Historical Fleet Embankment.

The ship’s hold has a complex configuration and height differences. The area where the visualization system was set is a 4-by-4-meter platform that can be viewed from all sides. In this part, the height of the hold (where the shaft for lowering cargo is situated) is 9 meters. Visitors descend to the site along the shaft via a spiral staircase. 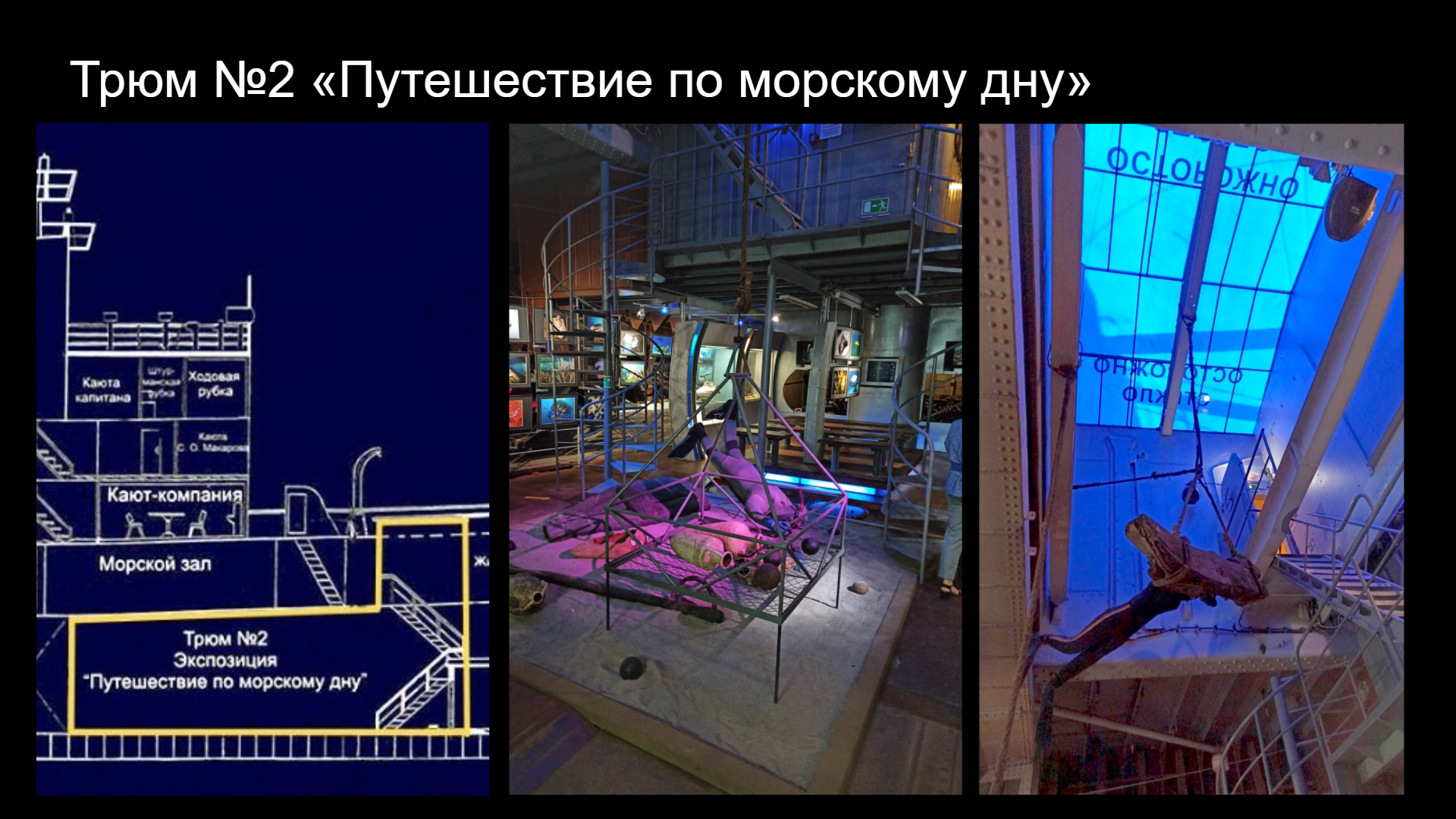 According to the concept of the desired exhibition, scenes illustrating the processes taking place at the bottom of the World Ocean should appear in free space, like holograms in science fiction movies.
Moreover, the conditions of a museum exhibition impose a number of requirements on the installation, i.e. it must be highly reliable and work smoothly for a long period of time; it must be easily maintained and operated, as well as have the ability to update the content, consume a small amount of energy, work in conditions of a certain level of illumination, etc.

Taking into account all these requirements, we decided to use the method of light projection on semitransparent reflective screens set in the center of the demonstration site. For implementation, we could use different designs and materials, and therefore we worked out various design options, materials, and the number of projectors.

The final design of the system was determined by the ceramic panel “In the depths of the Ocean”, made in the GDR in 1973 for the hydrographic vessel of Project 514 “Admiral Nevelskoy”, which is now located in the same hold of the Vityaz. It shows scenes illuminated by the rays of underwater research vehicles. It was proposed to use a similar design for the holographic installation.

The beam of the projector became a light source from above from the side of the hold covers and displayed the scene on a suspended rear projection screen. An equilateral four-sided pyramid with semitransparent mirror faces was used to form a holographic image, which allowed us to transfer the projected image to the center of the museum room and create the effect of “floating” objects in the air. 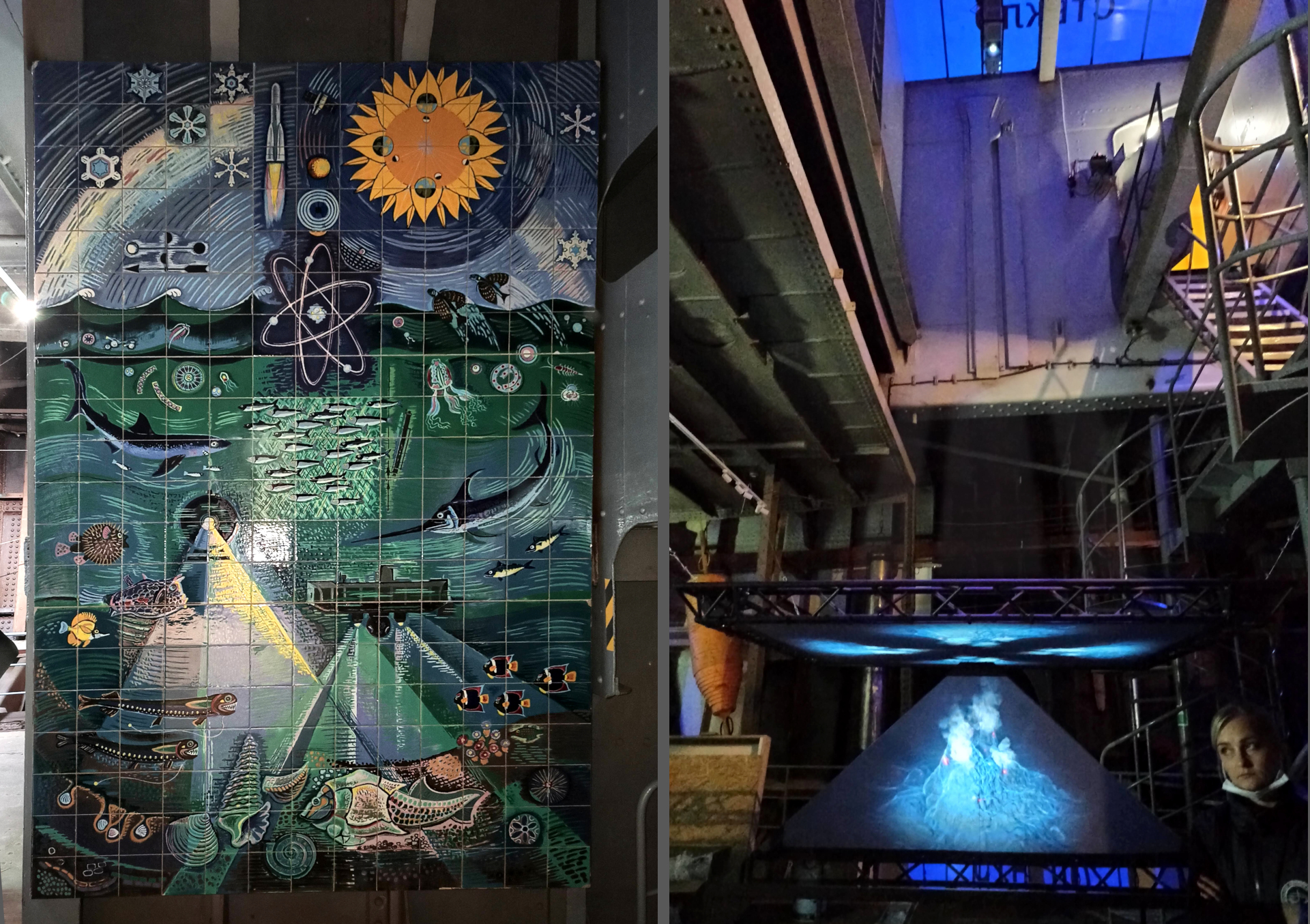 In the Depths of the Ocean ceramic panel

In contrast to the classical interference hologram, our construction uses the projection-reflection principle. However, the term “hologram” is quite applicable to describe the created image, because it has 3D properties and, moreover, as a result of special preparation of video material, the final image is not torn by the faces of the pyramid, but looks like a complete image that can be viewed from any angle when you go round the structure.

The multimedia equipment complex used in the project consists of the following: projector with a laser light source that provides sufficient brightness and beam spread; rear projection screen (polymer fabric with the necessary optical properties for image formation, mounted on a specially designed tension frame); nettop and wires.

The whole system takes into account the complex configuration of the room, peculiarities of transportation, and delivery of the pyramid base structure through the hold covers. The faces of the pyramid are made of 8 mm thick glass with a metallic reflective coating. This ensures high image quality, the rigidity of the construction, and easy maintenance (if dust gets on the glass, it can be wiped without fear of damage). To ensure safety and compliance with museum standards, tempered glass was used in production. 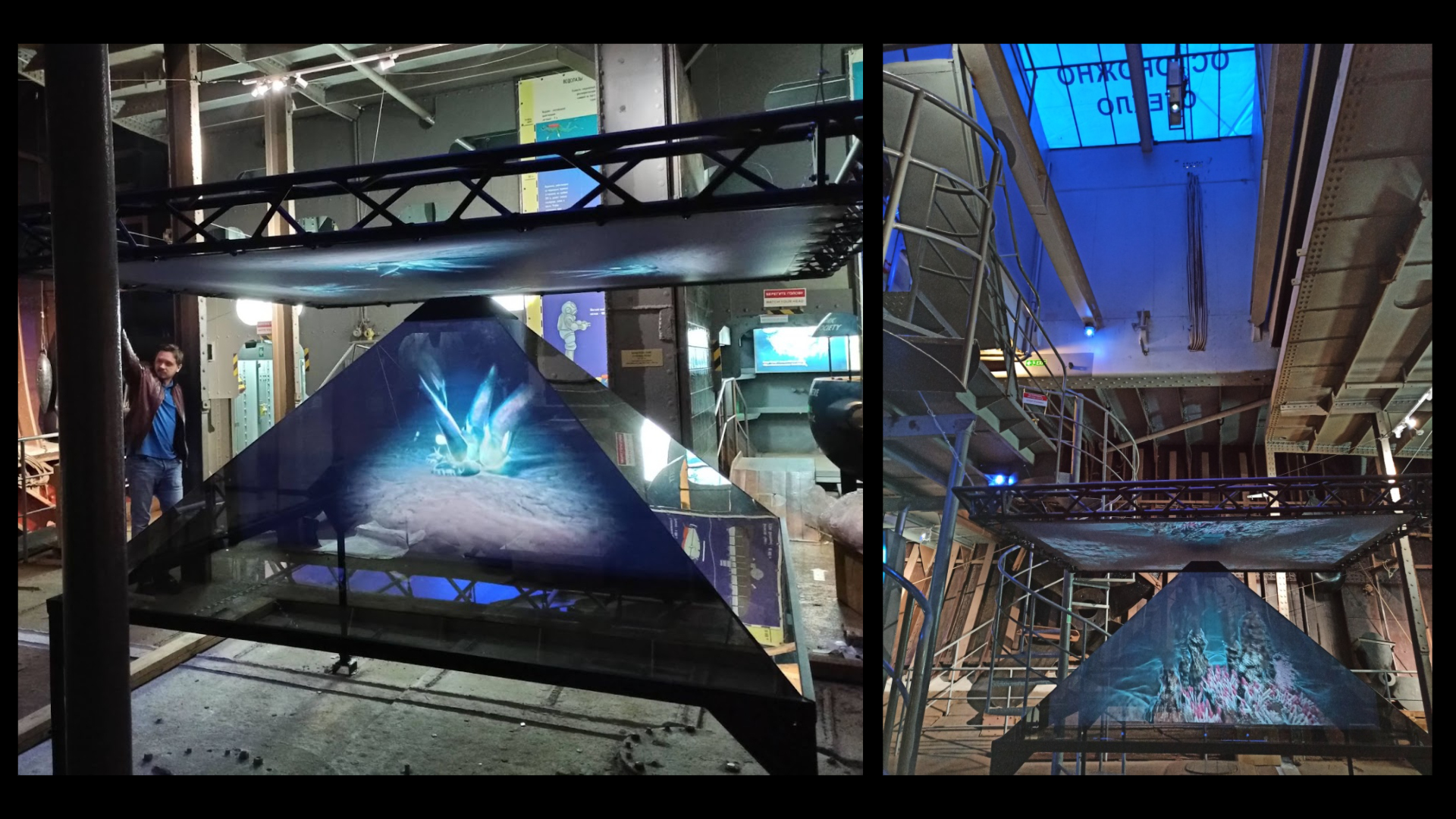 As a result, the design of the installation itself is also an example of technical art. When visitors first enter the hold and start descending the spiral staircase, they immediately see the image on the horizontal canvas formed by the projector. After going down to the hold, they can watch a holographic video “hanging” within the pyramid.

An important feature of this method of video demonstrating is the ability to combine objects of the real physical world and a virtual video image generated by the system. This significantly enhances the overall 3D effect of the installation.

As for the content part of the installation, the video was specially made for this type of playback. The video track is created based on views of the same scene from all angles, which allows creating a 3D effect that cannot be achieved using a standard video sequence. To create the video material, we used computer graphics tools that are also used to create movies.

The design of the projection hologram allows you to show video materials with a circular view of the scene, or to form a symmetrical image that can be viewed from any angle and preserves the integrity of objects when you move around the pyramid.

Video image generated by the system

For the opening of the exhibition, we prepared three scenes in two versions mentioned above: an underwater volcanic eruption, hydrothermal zones, and life in deep-sea troughs.

The project was implemented with the participation of: