How to combine 3D series and flip objects

In this tutorial I am going to show how to make a 3D photo with the flip effect. It’s not difficult to create a flipping photo when two 2D pictures change one another. But if you want such pictures to be 3D at the same time, follow these steps:

1. Let’s take a 3D photo. For example, a series of 24 frames (this one was shot by Guillaume d’Hubert, France). Let’s assume that I want to add 2 logos to this photo and I want these 2 logos to inerchange (flip effect). First, I add one of the logos to the picture.

Then I export (save) the series of frames:

Here’s what we get:

2. Now let’s do exactly the same but add another logo: 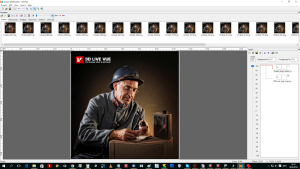 Export (save) the series of frames with the new logo.

Here’s what we get:

Such an order is recommended so that the viewer could clearly see one of the two logos from the front view. When you change the viewing angle and get closer to the border of the stereo vision zone, you will be shown the 2nd logo and it will remain clear transiting to the neighboring zone. All this will make the transitions between zones smooth, eliminate the ghosting effect and let you comfortably observe the 3D effect. 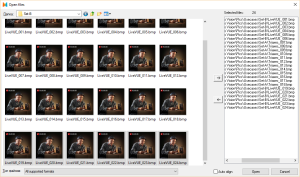 Now we encode the image for the lenticular material with the vertical lens orientation:

The final image will look like this when you change the viewing angle (in the horizontal plane):

If you decide to print the image, keep in mind that other factors might also influence the final result. Make sure the print quality is good and apply the image to the lenticular material as precisely as it is possible.
Also keep in mind that for the good 3D effect it is recommended to use the lens material with the small width viewing angle, while for the flip effect – the lens with the wide viewing angle should be used.
It means that you should experiment with viewing angles when you combine 3D and flip. The final result will depend on the image itself and your experience. Good luck!