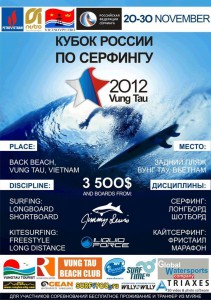 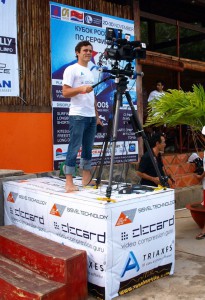 The Russian Surfing Championshop gathered the best Russian surfing athletes that performed in long board and short board styles, electrifying the audience with their amazing skills and tricks on the water. The kitesurfing and SUP surfing contests brought together both Russian and Vietnamese athletes, who tried to prove that they are the best at what they are doing.

The championship was recorded with a professional 3D camera provided by Elecard and streamed live over the Internet, making it possible for hundreds and thousands of people all around the world to enjoy the event online at their homes. The live stream was available at www.telebreeze.com/live for the three days of the championship and was delivered in 3D glasses-free, 3D and 2D free of charge.

Elecard, Triaxes and Sisvel Technology for the first time in history organized live event streaming on the public Internet in 3D format, which was compatible with regular 2D TV sets. “Today we have a unique opportunity to stream high-quality 3D video live from almost any part of the world. Everything you will need to watch it live is an Internet connection and a regular or 3D TV. We are truly experiencing the future technologies today,” said Elecard Group officials making a comment on the upcoming event.

The live online streaming was provided by Telebreeze that offered IPTV Transcoding and Delivery Services based on Elecard in-house solutions on a global scale. Telebreeze took care of setting up head-end stations, receiving and transcoding TV channels, and delivering the streams to end-user devices. Solutions that the company offered deploy advanced technologies and guarantee high-quality user experience.

The championship was taking place at the Vungtau Beach Club, located at the very center of the city’s back beach and offered the best view and craziest waves. The contest area was easily accessible and well visible from nearby hotels, bars and restaurants.