New 3D movies as well as 3D gimmicks and innovative solutions were demonstrated at he festival.

Participants discussed the future of 3D and spheres of its application. For example, Trubochkina N., the head of the “Multimedia Art” section of the Creative Artists’ Union and the president of the International Multimedia Alliance, told about new multimedia solutions in her report called “Innovative multimedia technologies in advertising, TV and film industry”. The report was accompanied by the images depicting fantastic 3D worlds that could be viewed without special glasses on an autostereoscopic QFHD (4K) system. The video for the report was prepared by the specialists from Triaxes. 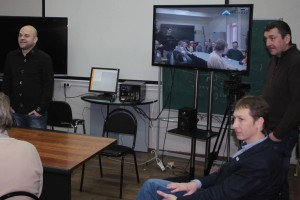 The stereo movie based on 3D broadcasting materials shot at the Russia Arms Expo in Nizhniy Tagil became the winner of the Festival. The movie was created by the specialists from the “Revolution 3D” company with the help of Triaxes.