Triaxes Morpher enables to create the Fade and Morphing effects.

Here’s an example. Initially we have two source pictures:

If you simply open these two images in Triaxes Morpher and calculate an interim series of frames you will get the fade effect (a smooth transition between source images).

Use the contours to indicate how parts of the images turn into each other (shown in the screenshot), then you will get a morphing effect. 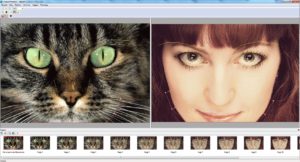